Winchester: “The House Built by Spirits”

To understand the Winchester Mystery House, located in San Jose, California, is to understand its owner, protector and overseer – Sarah Winchester. The house was more than a home or the tourist attraction it is today, it is a homage to Sarah’s beliefs and unrelenting determination to triumph over what she perceived to be her “curse”.

Sarah married into the wealthy Winchester family in 1962. Her husband and father-in-law owned the Winchester Repeating Arms Company in Connecticut, a prominent gun manufacturing company utilized during the American Civil War. Sarah and her husband, William, had a daughter they named Annie in 1866.

Tragedy seemed to strike in quick succession for Sarah. First, she suffered the death of her daughter less than a month after her birth from marasmus. Twenty years would pass before her husband would pass away due to tuberculosis which followed only four months after the death of her father-in-law.

Alone and distraught, Sarah chose not to ignore what she truly believed – she was cursed with bad luck.

Someone must want revenge against the Winchester family. But who and why? Sarah figured it out – the guns.  Sarah turned to a medium who advised her that the only way to appease the spirits killed by Winchester guns would be to move west, build a sprawling house and never stop, only then would she find peace and avoid her own death at the hands of these vengeful beings.

Sarah listened. She had inherited $20.5 million plus nearly fifty percent ownership of the Arms Company. On a daily basis Sarah earned what would be $1,000 a day (or $23,000 a day in 2013). She began to build. Many rooms served no purpose, windows that open to walls, a door that opens to a ledge stories above the ground with no warning, and stairs that go straight up into the ceiling. Sarah built to save her life. She never forgot her reasons and held nightly séances in a designated room with which had a door handle to leave, but none on the other side to re-enter. She ordered construction without blueprints, and the resulting house is a maze with which visitors then and now need a map or else risk being lost for days.

The 160 rooms twist and turn, through the secret passageways and unusual, Sarah kept her wits about her. If she was going to appease these spirits, she was going to trick them all the same. Many believe the reason for the confusing and irrational layout of the house was to trick the ghosts into not finding, following or tormenting Sarah. 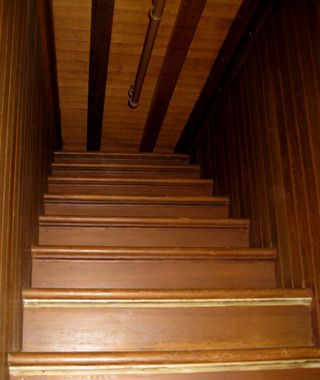 Sarah lived this way until she passed away in her sleep at the age of 83 of heart failure. It is said that upon hearing of her death “carpenters even left nails half driven” and construction ceased immediately. No one but Sarah understood the purpose for the house and its hold over her.

I visited the Winchester Mystery House in autumn of 2014. Without a doubt one it is one of the most interesting places I’ve ever seen. With every step there was a chance of mis-step. It was impossible to know what was waiting around the next corner.

CBS Films announced it has acquired the U.S. distribution rights to Helen Mirren’s drama “Winchester” from Bullitt Entertainment and Diamond Pictures. Production will begin in March 2017.